Amazing! How to make clouds indoors: The art of Berndnaut Smilde.

Berndnaut Smilde (b.1978, Groningen, Netherlands) lives and works in Amsterdam. He produces striking images of ‘real’ clouds suspended within empty rooms. Using a fog machine, he carefully adjusts the temperature and humidity to produce clouds just long enough to be photographed.

It usually takes the artist a few days to set up, or “acclimatise” a space, before a photo shoot. There’s a breathtaking second when a cloud hangs together daintily, resembling a floating mixture of white vapor and mist that you might pass near a damp mountaintop, before it begins to break up and look like a stage set again. Though Smilde’s creations are all types of cumulus clouds, the denser ones tend to hang around the longest.

Last year Smilde banned audiences from watching him create his cloud works after receiving an angry letter from a member of the public in Kentucky. “I think she was expecting a spiritual experience,” he says. “A lot of people think a high-tech process is involved. But I work with anything just to create this idea.” His toolbox has been assembled to manipulate levels of smoke, water, wind, convection currents and light.

Smilde is interested in the temporal nature of construction and deconstruction. His works question: inside and outside, temporality, size, the function of materials and architectural elements. 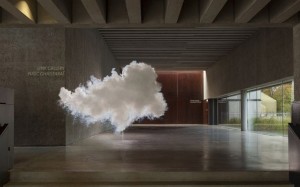 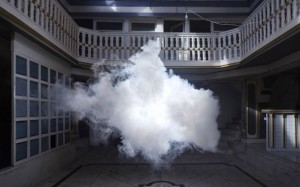 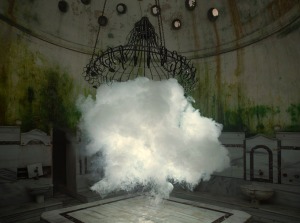